Many of the strategies in this poker book are universally applicable to all types of poker competition. Whether you are an experienced player or a newcomer, you will gain valuable advice for both regular games and tournaments.

In stock
Only 8 left
€29.95
Compare
Related Products
Check items to add to the cart or
Details

Tom McEvoy, 1983 World Champion of Poker, learned to play poker at a young age. After deciding that accounting was not his career of choice, he dedicated himself to playing poker professionally. He has won millions of dollars playing poker tournaments and is considered one of the best tournament players in the world.
THE SECRET TO WINNING TOURNAMENTS Tournament Poker is the definitive guide to winning in the rapidly expanding world of tournament poker. This poker book is packed solid with winning strategies and valuable advice on how to win more money, more often.

In these pages, Ton McEvoy teaches you how to win each of the eleven games in the World Series of Poker, including No-Limit Hold'em, Pot-Limit Hold'em, Limit Hold'em, Seven-Cards stud, Omaha and Omaha High-Low. He also includes inside information on rebuys, half-half, mixed-games, tournaments, satellites, super satellites, freezeouts, low-stakes rebuy events, and strategies for each stage of the tournament. 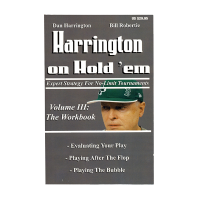 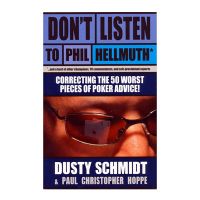 Don't listen to Phil Hellmuth
Categories
Compare Products
Compare
Clear All
You have no items to compare.